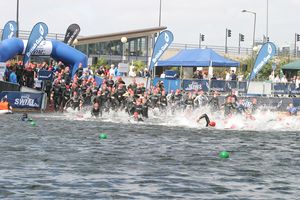 Its organiser, Nova International, received an award for the Best UK Event at the 2012 H2Open Awards organized by H2Open Magazine, an award designed to celebrate achievement in open water swimming. Nova International via the British Gas Great Swim Series is credited with driving the massive rise in popularity of open water swimming in the UK, the series attracted over 20,000 swimmers across its 5 events in 2011.

The first 'Great Swim' was the Great North Swim on 14 September 2008 on Windermere, UK. At the time there were no other mass participation events that attracted such large amount of swimmers to take part in open water with 2200 entries taking part in the one mile open water swim. Five of the six Olympic medallists fresh from Beijing took part in the first GNS (with the exception of Larisa Ilchenko who did go on to swim in the event).

In 2009 Great Swim became a Series of four swims and took on the title sponsor of British Gas. All swims were televised on Channel 4 with one hour shows focusing on the elite races.

In 2010 the British Gas Great Salford Swim was added to the Series. Issues with Blue Green Algae led to the North Swim and Scottish Swim being cancelled.