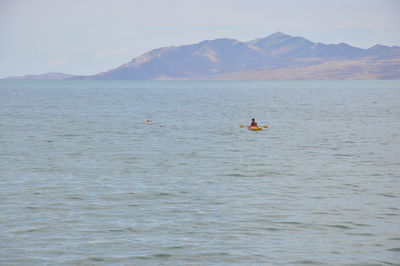 Great Salt Lake with Antelope Island in the background.

The Great Salt Lake is the largest natural lake west of the Mississippi River in the United States. The Great Salt Lake is approximately 75 miles long and about 35 miles wide. Located in several wide flat basins, a slight rise in water lever expands the surface area of the lake considerably. The first scientific measurements were taken in 1849 and since then the lake level has varied by 20 feet, shifting the shoreline in some places as much as 15 miles.

Great Salt Lake is salty because it does not have an outlet. Tributary rivers are constantly bringing in small amounts of salt dissolved in their fresh water flow. Once in the Great Salt Lake much of the water evaporates leaving the salt behind.

Great Salt Lake is too saline to support fish and most other aquatic species. Several types of algae live in the lake. Brine shrimp and brine flies can tolerate the high salt content and feed on the algae. Brine shrimp eggs are harvested commercially and are sold overseas as prawn food. The oft maligned brine flies do not bite or land on people and are the primary food source for many birds that migrate to the lake. For most of the summer brine flies form a ring around the entire shoreline and rarely venture more than a few feet from the water's edge. Biologists have estimated their population to be over one hundred billion.

The ever-fluctuating Great Salt Lake has frustrated attempts to develop its shoreline. As a result much of the lake is ringed by extensive wetlands making Great Salt Lake one of the most important resources for migrating and nesting birds.

Great Salt Lake draws people for a variety of recreational experiences and to enjoy what John Muir called "one of the great views on the American Continent."

Bridger Bay Beach on the north end of Antelope Island is called the nicest beach on the entire lake. The beach is a two-mile long, hundred yard wide expanse of white oolitic sand. Oolitic sand is actually formed in the lake and is made up of concentric layers of calcium carbonate (lime). Look closely at the sand: most grains are smooth and perfectly round. Bridger Bay is where many people come to float like a cork because you cannot sink in the Great Salt Lake. To lie back and float upon the lake with only the sound of the gulls overhead is a unique experience unlikely to be forgotten.

Because of the flat lake floor, the varying water level causes great differences in the volume of the lake. The water levels have varied greatly over time. The lowest level of 4,161 ft above sea level was recorded in 1963, and fluctuated up to a historical high of 4,211 in 1983. The water level was so high in 1983 that it posed serious flooding risks to homes and property and very large and costly pumps were used to lower the lake to safe levels, and the pumps were turned off in 1989. In 2010 the water level was nearly at the low 1963 level, but in 2011 has risen significantly. Current water levels are recorded and can be referenced here.

There are two currently organized swim races on the Great Salt Lake:

Unless the swim is done in a river or in the ocean, winter swimming in freezing temperatures often includes the process of carving through ice. But with the Great Salt Lake, the water never freezes. The Wasatch Front Polar Bear club was formed in fall of 2011. Weekly swims were organized through the entire fall, winter and spring seasons.