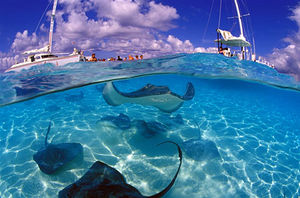 Grand Cayman is the largest of the three Cayman Islands and the location of the nation's capital, George Town. In relation to the other two Cayman Islands, it is approximately 75 miles (121 km) southwest of Little Cayman and 90 miles (145 km) southwest of Cayman Brac. It is site of numerous open water swimming competitions including the annual Flowers Sea Swim.

Grand Cayman encompasses 76% of the country's entire land mass. The island is approximately 22 miles long with its widest point being 8 miles long. The elevation ranges from sea level at the beaches to 60 feet above sea level on the North Side's Mastic Trail.

There are just under 600 banks and trust companies in the Grand Cayman, including 43 of the 50 largest banks in the world. Because of this large financial presence on the island, banking, investments, and insurance drive the economy in Grand Cayman.

There are fast food restaurants, night clubs and resorts on the western side of the island down to George Town. Because of its clubs, resorts, and hotels, Seven Mile Beach has the largest concentration of visitors and tourists on the island.

Water sports such as swimming, scuba diving and snorkeling are among the most popular activities on Grand Cayman as the island is known for its coral reefs and underwater sea walls along with a number of shipwrecks.

As well, Grand Cayman Island also has a number of natural attractions: the blow holes in the East End district, the Mastic Trail that runs north to south through the center of the island, Hell in the West Bay, and the acclaimed Queen Elizabeth II Botanic Park, to name a few. [edit] Infrastructure