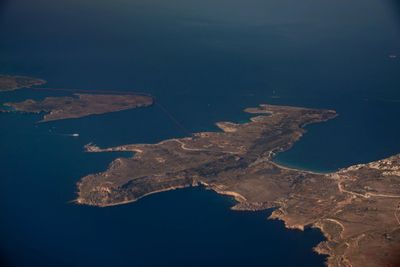 Gozo is an island of the Maltese archipelago in the Mediterranean Sea. The island is part of Malta. After the island of Malta itself, it is the second-largest island in the archipelago. Compared to its southeastern neighbor, Gozo is more rural and known for its scenic hills, which are featured on its coat of arms.

As of March 2015, the island has a population of around 37,342 (out of Malta's total 475,000), and its inhabitants are known as Gozitans (Maltese: Għawdxin). It is rich in historic locations such as the Ġgantija temples, which, along with the other Megalithic Temples of Malta, are among the world's oldest free-standing structures.

The island is rural in character and, compared to the main island Malta, less developed. It was known for the Azure Window, a natural limestone arch that was a remarkable geological feature, until its collapse on 8 March 2017. The island has other notable natural features, including the Inland Sea and Wied il-Mielaħ Window. There are many beaches on the island, as well as seaside resorts that are popular with both locals and tourists, the most popular being Marsalforn and Xlendi. Gozo is considered one of the top diving destinations in the Mediterranean and a center for water sports including open water swimming.