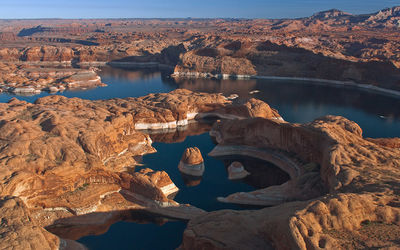 Glen Canyon, site of scenes in the 1968 movie Planet of the Apes

Glen Canyon is a canyon that is located in southeastern and south central Utah and northwestern Arizona within the Vermilion Cliffs area. An immense area located north of the Grand Canyon, it too was carved by the Colorado River.

A reservoir, Lake Powell, was created by the Glen Canyon Dam. Glen Canyon Dam was completed in 1963, destroying much of Glen Canyon. Lake Powell emerged from a struggle over damming Dinosaur National Monument. The Sierra Club and its leader, David Brower, were instrumental in blocking the dam in Dinosaur, ignoring Glen Canyon in the process. Before Glen Canyon was flooded, but after the struggle in Congress, Brower floated the canyon and realized what a tremendous resource it was. This experience transformed Brower's attitude towards environmental preservation, making him more radical and less likely to compromise. It was very similar to the experience of John Muir with the Hetch Hetchy Reservoir. For Brower, it steeled him for the battle over a dam in the Grand Canyon. Beginning in the late 1990s, the Sierra Club and other organizations renewed the call to drain Lake Powell in Lower Glen Canyon.

Planet of the Apes Scenes[edit]