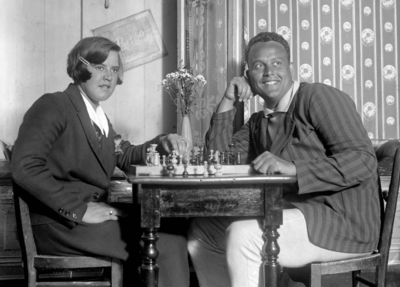 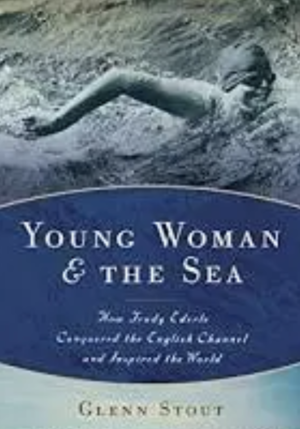 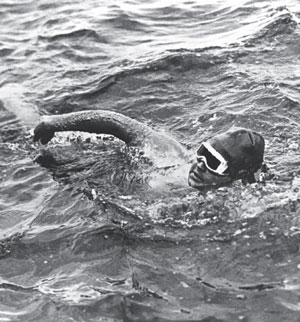 Gertrude Ederle, first female swimmer across the English Channel in 1926 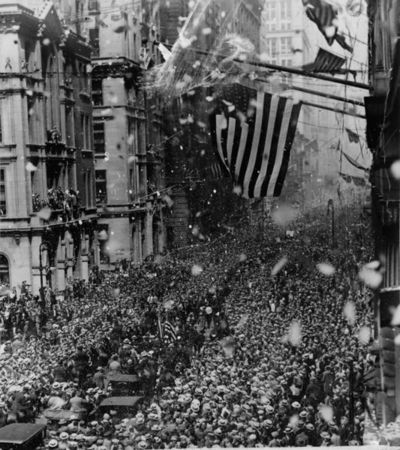 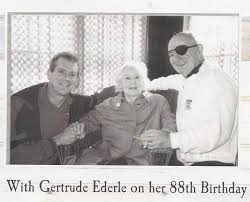 Gertrude Caroline Ederle (23 October 1905 - 30 November 2003) was an American competitive swimmer and channel swimmer. Ederle was the daughter of a German immigrant who ran a butcher shop on Tenth Avenue (Manhattan)/Amsterdam Avenue in Manhattan; she was born in New York City. She was known as Trudy as a youth. Her father taught her to swim in Highlands, New Jersey, where the family owned a summer cottage. Among other nicknames, the press sometimes called her Queen of the Waves. Ederle, who was called America's best girl by President Calvin Coolidge in 1926 after she became the first woman to swim across the English Channel.

Ederle had poor hearing since childhood due to measles, and by the 1940s she was completely deaf. She spent much of the rest of her life teaching swimming to deaf children. She never married and died on 40 November 2004 in Wyckoff, New Jersey, at the age of 98. She was interred in the Woodlawn Cemetery, Bronx located in the Bronx, New York.

"People said women couldn't swim the Channel but I proved they could."

Ederle possessed a contract from both the New York Daily News and Chicago Tribune when she attempted the English Channel swim a second time. The money she received paid her expenses and provided her with a modest salary. It also gave her a bonus in exchange for exclusive rights to her personal story. The Journal News and the Chicago Tribune got the jump on every other newspaper in America. Another American swimmer in France in 1926 to try and swim the Channel was Lillian Cannon from Baltimore. She was also sponsored by a newspaper, the Baltimore Post, which tried to create a rivalry between her and Ederle in the weeks spent training off the French coast. In addition to Cannon, several other swimmers, including two other American women - Clarabelle Barrett and Amelia Gade Corson - were training in England with the goal of becoming the first woman to swim the Channel. Barrett and Cannon were unsuccessful but three weeks after Ederle's feat, Corson crossed in a time that was 50 minutes slower than Ederle.

The people alongside Ederle aboard the tug on 6 August 1926 included her father and one of her sisters, Margaret, and Julie Harpman, wife of Westbrook Pegler and a writer for the New York Daily News, the paper that sponsored Ederle's swim. Harpman refused to allow any other reporters on the tug - in order to protect her 'scoop' - and as a result a second tug was hired by the disgruntled reporters. On several occasions during the swim this tug deliberately came in close to Ederle in the hope she would touch it and thereby be disqualified. Fortunately, Ederle didn't, but the incident caused much bitterness subsequently. It also led to accusations in the British press, that the two tugs had in fact sheltered Ederle from the bad weather and thus made her swim 'easier'.

During her twelfth hour at sea, the captain of the ship had become so concerned by unfavorable winds that someone on board, called to her Gertie, you must come out! The exhausted swimmer lifted her head from the choppy waters and replied, What for?

Only five men had been able to swim the English Channel before Ederle. The best time had been 16 hours 44 minutes by an Italian-born Argentinian, Enrique Tirabocchi. Ederle walked up the beach at Dover, England after 14 hours 40 minutes. The first person to greet her was a British immigration officer who requested a passport from "the bleary-eyed, waterlogged teenager."

When Ederle returned home, she was greeted with a ticker-tape parade in New York City. She went on to play herself in a movie (Swim Girl, Swim) and tour the vaudeville circuit, including Billy Rose's Aquacade. She met President Calvin Coolidge and had a song and a dance step named for her. Unfortunately, her manager, through a combination of incompetence and duplicity, mishandled her showbiz career and Ederle failed to reap the rewards she deserved. A fall down the steps of her apartment building in 1944 twisted her spine and left her bedridden for several years, but in 1949 she recovered well enough to appear at the New York World's Fair. She was inducted into the International Swimming Hall of Fame in 1965 and the International Marathon Swimming Hall of Fame in 1964.