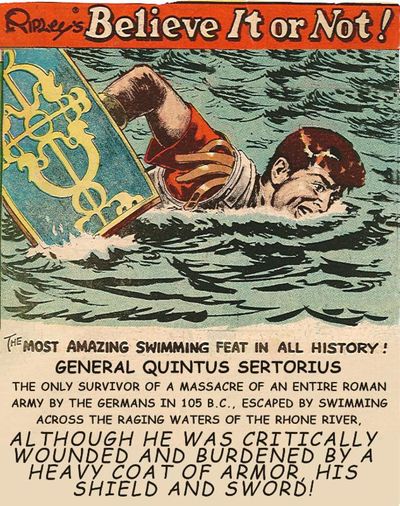 General Quintus Sertorius (c. 126 BC – 73 BC) was a Roman statesman and general, born in Nursia, in Sabine territory. His brilliance as a military commander was shown most clearly in his battles against Rome for control of Hispania.

He once swam across the Rhône River although he was critically wounded and burdened by armor after he survived a massacre of the 80,000-man Roman Army along with an estimated 40,000 auxiliary troops (allies) and servants and camp followers - virtually all of their participants in the battle - by the Germans on 6 October 105 B.C. at the Battle of Arausio that took place between the town of Arausio (modern day Orange, Vaucluse) and the Rhône River. Two Roman armies, commanded by Quintus Servilius Caepio and consul Gnaeus Mallius Maximus, did not cooperate and fought with devastating results.