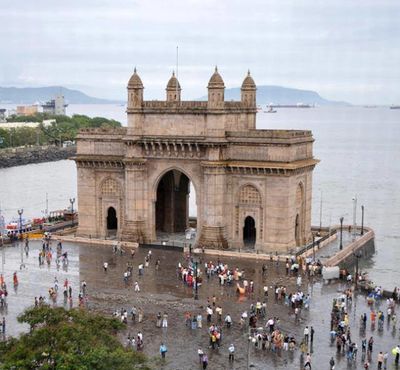 The Gate Way of India in Mumbai, India

The swim has been completed by the following swimmers:

Mumbai (formerly called Bombay) is a densely populated city on India’s west coast. A financial center, it is India's largest city. On the Mumbai Harbour waterfront stands the iconic Gateway of India stone arch, built by the British Raj in 1924. Offshore, nearby Elephanta Island holds ancient cave temples dedicated to the Hindu god Shiva. The city's also famous as the heart of the Bollywood film industry.

The Gateway of India is a monument built during the British Raj in Mumbai (formerly Bombay), India. It is located on the waterfront in the Apollo Bunder area in South Mumbai and overlooks the Arabian Sea. The structure is a basalt arch, 26 meters (85 feet) high. It lies at the end of Chhatrapati Shivaji Marg at the water's edge in Mumbai Harbour. It was a crude jetty used by the fishing community which was later renovated and used as a landing place for British governors and other prominent people. In earlier times, it would have been the first structure that visitors arriving by boat in Mumbai would have seen. The Gateway has also been referred to as the Taj Mahal of Mumbai, and is the city's top tourist attraction.