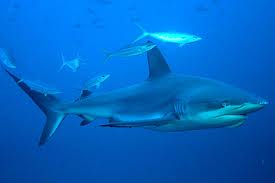 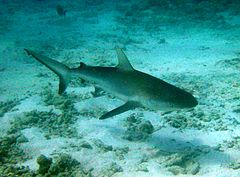 noun - Galapagos shark is a species of requiem shark found worldwide. This species favors clear reef environments around oceanic islands, where it is often the most abundant shark species. A large species that often reaches 3.0 m (9.8 ft), the Galapagos reef shark has a typical fusiform "reef shark" shape and is very difficult to distinguish from the dusky shark (C. obscurus) and the grey reef shark (C. amblyrhynchos). An identifying character of this species is its tall first dorsal fin, which has a slightly rounded tip and originates over the rear tips of the pectoral fins.

Galapagos sharks are active predators often encountered in large groups. Galapagos sharks are bold and have behaved aggressively towards humans, and are thus regarded as dangerous. The International Union for Conservation of Nature has assessed this species as Near Threatened, as it has a slow reproductive rate and there is heavy fishing pressure across its range.

Galapagos sharks are common around oceanic island reefs. The Galapagos shark is found mainly off tropical oceanic islands. In the Atlantic Ocean, it occurs around Bermuda, the Virgin Islands, Madeira, Cape Verde, Ascension Island, Saint Helena and São Tomé Island. In the Indian Ocean, it is known from Walter's Shoal off southern Madagascar. In the Pacific Ocean, it occurs around Lord Howe Island, the Marianas Islands, the Marshall Islands, the Kermadec Islands, Tupai, the Tuamotu Archipelago, the Hawaiian Islands, the Galapagos Islands, Cocos Island, the Revillagigedo Islands, Clipperton Island, and Malpelo. There are a few reports of this species in continental waters off the Iberian Peninsula, Baja California, Guatemala, Colombia, and eastern Australia.

Galapagos sharks are generally found over continental and insular shelves near the coast, preferring rugged reef habitats with clear water and strong converging currents. They are also known to congregate around rocky islets and seamounts. This species is capable of crossing the open ocean between islands and has been reported at least 50 km (31 mi) from land.

The Galapagos shark usually hunts near the sea bottom. The primary food of Galapagos sharks are benthic bony fishes (including eels, sea bass, flatfish, flatheads, and triggerfish) and octopuses. They also occasionally take surface-dwelling prey such as mackerel, flying fish, and squid. As the sharks grow larger, they consume increasing numbers of rays and smaller sharks, including of their own species and crustaceans, as well as indigestible items such as leaves, coral, rocks, and garbage.

At the Galapagos Islands, this species has been observed attacking Galapagos fur seals and sea lions, and marine iguanas.