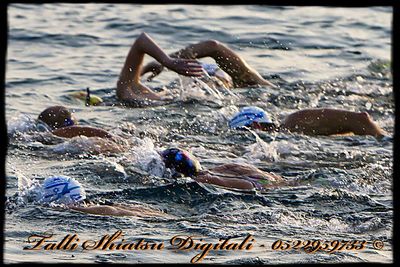 Gadi Katz is an Israeli open water swimmer and coach. He is the founder and organizer of the Three Days In Three Seas in Israel, a unique 3-day 30 km tandem marathon swim. He is the founder of Total Immersion Israel that is revolutionizing the swimming community in his home country of Israel.

The Three Days In Three Seas field is limited to 200 participants who are interested in swimming 10 km in the Mediterranean Sea, 10 km in the Red Sea, and 10 km in the Sea of Galilee on three consecutive days. The field was separated in three groups: a 15 minutes per 1 km pack, an 18 minutes per 1 km pack and a 24 minutes per 1 km pack. Each group was guided by one escort boat and two kayakers. Each pack paused for hydration or fueling every 50 minutes. With the water temperature around 25-26°C (77-78°F), no wetsuits were allowed. Swimmers who participated in all three swims have the first priority while swimmers who participate in only 1 or 2 swims will receive a final confirmation 7 – 10 days before.

64 people total participated in the 3 Days in 3 Seas event in Israel. 30 swimmers traversed the entire distance of 30 km over three days. There were 25 different pilots, kayakers, volunteers, photographers, doctors and paramedics who escorted the mass marathon swim. Each day was a different adventure with the field divided into two groups. "The pelotons each day were incredible. In the Red Sea, a female dolphin escorted us for a few minutes. The Mediterranean Sea was glassy flat while the Sea of Galilee was a bit murky and cold," recalled Gadi. "It was amazing."

He organized a 21 km crossing of Lake Kinneret.