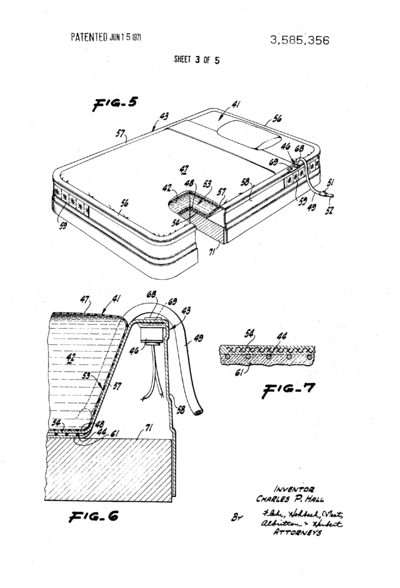 Waterbed patent of Charlie Prior Hall

noun - A waterbed, water mattress, or flotation mattress is a bed or mattress filled with water. Waterbeds intended for medical therapies appear in various reports through the 19th century. The modern version, invented in San Francisco and patented in 1971 by Charlie Hall, became an extremely popular consumer item in the United States through the 1980s and 1990s. Currently they account for less than 5% of new bed sales.

A hard-sided waterbed consists of a water-containing mattress inside a rectangular frame of wood resting on a plywood deck that sits on a platform.

Early waterbed mattresses, and many inexpensive modern mattresses, have a single water chamber. When the water mass in these "free flow" mattresses is disturbed, significant wave action can be felt, and they need time to stabilize after a disturbance. Later types employed wave-reducing methods, including fiber batting and interconnected water chambers. More expensive "waveless" modern waterbeds have a mixture of air and water chambers, usually interconnected.

Water beds are normally heated. Temperature is controlled via a thermostat and set to personal preference, but is most commonly average skin temperature, 30°C (86°F).

The modern waterbed was created by Charles Prior Hall in 1968, while he was a design student at San Francisco State University in California. Fellow SFSU students Paul Heckel and Evan Fawkes also contributed to the concept. Hall originally wanted to make an innovative chair. His first prototype was a vinyl bag with 300 pounds (136 kg) of cornstarch, but the result was uncomfortable. He next filled it with Jell-O, which had an unfortunate "tendency to decompose". Ultimately, he abandoned working on a chair, and settled on perfecting a bed.

Hall was granted a patent on his waterbed, which he originally called "the pleasure pit", in 1971. He founded Innerspace Environments, a manufacturing and sales company which became the leading retailer of waterbeds in the U.S., with 30 owned-and-operated stores. Hall was unable to defend his patents against multiple competitors and couldn't take full advantage of the waterbed's subsequent popularity. Sales peaked in 1987 at 22% of the domestic mattress industry.