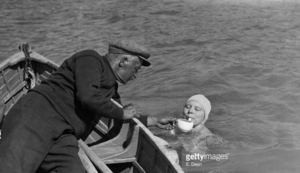 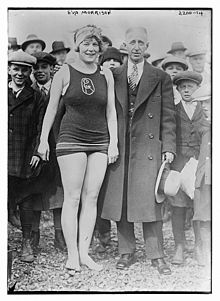 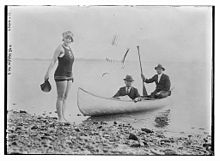 Eva Belle Morrison Abdou (8 March 1911 – 17 March 1985) was an American swimmer and hospital librarian from the Boston area who was inducted in the International Marathon Swimming Hall of Fame in 1973 as an Honour Swimmer. She completed her first 8 km (5-mile) swim at the age of 10 in 1918 and was a prominent marathon swimmer in the 1920’s. She swam 19.3 km (12 miles) from Boston Light Swim more than 20 times and was training to swim the English Channel at the same time as Gertrude Ederle. She won the 1935 Dover Trophy in 15 hours 55 minutes for a 28.9 km (18-mile) swim from Folkestone to Margate in the United Kingdom.

In 1924, Morrison swam for over 7 hours in the Boston Light Swim and made it to within one mile of Boston Light. The other swimmers exited the race earlier saying the water was too cold. Morrison ate chocolates and finally stopped because the tide had changed.

Her trainer coach was Charles Cole during her preparations for the English Channel in 1935.

She served on the initial Board of Governors for the International Professional Swimmers' Association when it formed in New York City in 1927.