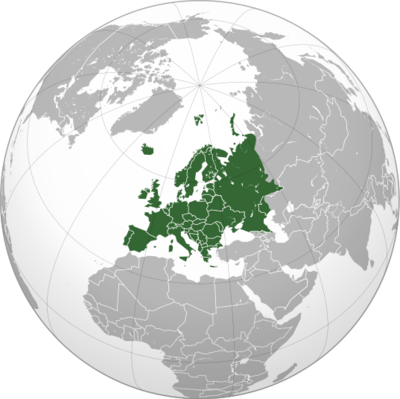 Europe is a continent located entirely in the Northern Hemisphere and mostly in the Eastern Hemisphere. Europe is bordered by the Arctic Ocean to the north, the Atlantic Ocean to the west, and the Mediterranean Sea to the south. It comprises the westernmost part of Eurasia. Europe is generally considered as separated from Asia by the watershed divides of the Ural and Caucasus Mountains, the Ural River, the Caspian Sea and Black Sea, and the waterways of the Turkish Straits. Yet the non-oceanic borders of Europe—a concept dating back to classical antiquity—are arbitrary and amount to a historical and social construct. The primarily physiographic term "continent" as applied to Europe also incorporates cultural and political elements whose discontinuities are not always reflected by the continent's current overland boundary with Asia.

Europe covers about 10,180,000 square kilometres (3,930,000 sq mi), or 2% of the Earth's surface (6.8% of land area). Politically, Europe is divided into about fifty sovereign states of which the Russian Federation is the largest and most populous, spanning 39% of the continent and comprising 15% of its population. Europe had a total population of about 741 million (about 11% of world population) as of 2016.[1] The European climate is largely affected by warm Atlantic currents that temper winters and summers on much of the continent, even at latitudes along which the climate in Asia and North America is severe. Further from the sea, seasonal differences are more noticeable than close to the coast.

Europe is part of Continents Seven, a series of 7 different solo open water swims that is completed in all of the seven continents of Planet Earth either (1) within one year, or (2) over the course of one's career. The 7 different open water swims must be performed on all the world's main continuous expanses of land: Africa, Antarctica, Asia, Australia (or Oceania), Europe, North America, and South America.