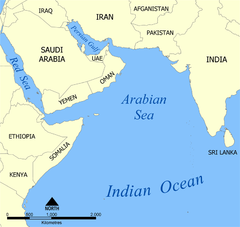 The Arabian Sea is a region of the northern Indian Ocean bounded on the north by Pakistan and Iran, on the southwest by northeastern Somalia, on the east by India, and on the west by the Arabian Peninsula. Some of the ancient names of this body of water include Sindhu Sagar (meaning "Sea of Sindh" in Sanskrit) and Erythraean Sea. It is part of the Seven Seas.