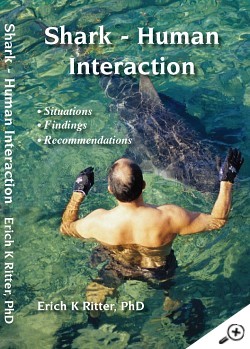 Erich Ritter has a Ph.D. from Zurich University in “Behavioral Ecology” and is a shark-human interaction specialist. Ritter's main expertise is the body language of sharks, with a major interest in shark attacks and their causes. Many of the old theories of why sharks attack have been erased through his experiments, and new ideas proposed. He is the only shark attack expert to recreate many of the typical attack scenarios with the respective species. His understanding of potential reasons for shark attacks opened new doors in this field of research.

Ritter is the head of the SharkSchool™, an institution that teaches divers, snorklers, rescue swimmers and others how to interact with sharks, what to look for when entering the water and most importantly how to feel safe among sharks. He is also the executive director of SAVN™, the Shark Accident Victim Nework, and non-for-profit organisation to help shark victims and wrote the book Shark-Human Interaction.

Ritter developed the first interaction system for swimmers, divers and snorkelers (ADORE-SANE) that allows safe swimming and interaction with any potentially dangerous sharks under different conditions. He has spent the last eight years collecting data from around the world. Besides some reef species, his primary focus is on bull sharks, lemon sharks and great whites. Ritter has been extensively interviewed in magazines and on TV shows promoting and explaining his ways of shark-human interaction, and explanations of shark attacks. Ritter holds workshops in the Bahamas, South Africa and the Maldives on a regular basis.