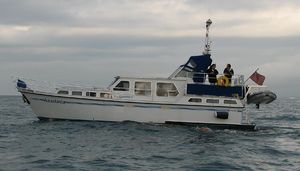 Spelling has been escorting English Channel swimmers for over 10 years and is a registered pilot with the Channel Swimming & Piloting Federation. His boat is very much a family-run boat, with his son-in-law Robert Thompson as a permanent crew member. His son Mike Spelling is hoping to become a pilot, and is currently training in the North Sea.

Eddie Spelling, Robert Thompson, and Mike Spelling manage a small family company called One Charter that utilizes their boat, Anastasia in order to escort swimmers across the English Channel. One Charter also offers a Live Channel Swimming Viewer that enables family, friends, and fans to watch in real-time as an individual channel swimmer or relay team attempts a crossing.

Sarah Thomas is the protagonist of the film The Other Side, a documentary covering her English Channel quad swim. On 17 September 2019, she completed an unprecedented 134 km four-way crossing of the English Channel in 54 hours 10 minutes 0 seconds at the age of 37 where she swam from England to France to England to France and back to England with escort pilot Eddie Spelling on Anastasia.

Spelling has piloted the following successful solo swimmers and relays across the English Channel: