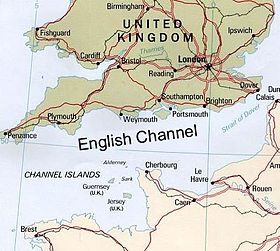 White Cliffs of Dover and the Strait of Dover as seen from Cap Griz Nez, France

noun - EC is an acronym for the English Channel frequently used verbally and in writing among open water swimmers, especially channel swimmers and marathon swimmers.

Swimmers who swim across the English Channel are credited with swimming 18.2 nautical miles (or 20.94 miles or 33.7 km from Shakespeare Beach, Dover, England to Cap Gris Nez, France which is the shortest straight-line tangent between England and France.

The women completed her dream, a swim across the EC.

Marathon swimmers challenge themselves to swim between Dover, England to Cap Gris Nez, France. The famous waterway is part of the Oceans Seven and is considered to be the most prestigious marathon swim in the world. Solo and relay crossings are governed by two organizations: the Channel Swimming Association and the Channel Swimming & Piloting Federation.

The Strait of Dover, at the Channel's eastern end is also its narrowest point, while its widest point lies between Lyme Bay and the Gulf of Saint Malo near the midpoint of the waterway. It is relatively shallow, with an average depth of about 120 m (390 ft) at its widest part, reducing to a depth of about 45 m (148 ft) between Dover and Calais. From there eastwards the adjoining North Sea continues to shallow to about 26 m (85 ft) in the Broad Fourteens where it lies over the watershed of the former land bridge between East Anglia and the Low Countries. It reaches a maximum depth of 180 m (590 ft) in the submerged valley of Hurds Deep, 30 mi (48 km) west-northwest of Guernsey. The eastern region along the French coast between Cherbourg and the mouth of the Seine river at Le Havre is frequently referred to as the Bay of the Seine (French: Baie de Seine).

Several major islands are situated in the Channel, the most notable being the Isle of Wight off the English coast and the British Crown Dependencies the Channel Islands off the coast of France. The Isles of Scilly off the far southwest coast of England are not generally counted as being in the Channel. The coastline, particularly on the French shore, is deeply indented; several small islands close to the coastline, including Chausey and Mont Saint-Michel, are within French jurisdiction. The Cotentin Peninsula in France juts out into the Channel, and the Isle of Wight creates a small parallel channel known as the Solent in English waters. The Celtic Sea is to the west of the Channel.

The English Channel is part of the Oceans Seven, a global 7-channel challenge that consists of the following 7 waterways around the world. It was first proposed by Steven Munatones in June 2008 and first achieved by Stephen Redmond of Ireland in July 2012:

Video of the English Channel[edit]

The EC (English Channel) is not always this way, but Donal Buckley captured Dover Harbour on a particularly rough day in September 2011: