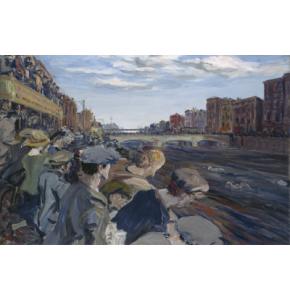 The Liffey Swim by Jack B. Yeats

The Liffey Swim is an annual race in Dublin's main river, the Liffey and is one of Ireland's most famous open water swimming competitions. It is organised by Swim Ireland and is held on a Saturday in either late August or early September. Entrants to the Liffey Swim must complete five races of the season to qualify. Many levels and ages of swimmers compete in the race, but entrants must be a member of a swimming club and be able to swim a mile. The race is handicapped with the slowest swimmers starting first and the fastest last.

The race starts at the Watling Street Bridge near the Guinness Brewery and takes competitors past landmarks such as the Four Courts, under the Ha'penny Bridge and O'Connell Bridge to finish at the The Custom House. Wetsuits are not allowed in the race that often coincides with the Liffey Descent Canoe Race. The water authority releases 30 million tons of clean water from the Liffey reservoir to raise the river to flood level for this event.

The first Liffey Swim took place on the 22 July 1920. Bernard Fagan was the first to organise the race. Fagan was a swimmer and became a public health analyst for Dublin Corporation in 1923. The first Liffey Swim had an entry of 27 male swimmers and was won by J.J Kennedy with Bernard Fagan himself coming in third. Fagan's son Jack Fagan later won the Liffey Swim in 1951. During the 1930s, 1940s and early 1950s, the Liffey Swim attracted large crowds. The race has not changed length 1.5 miles (2.2 km) but the start and finish points have changed over the years. In 1991, the first ladies race was introduced.

The 2009 Liffey Swim was the 90th anniversary of the race and saw electronic timing used for the first time.

One of the earliest Liffey Swims was portrayed in the Jack B. Yeats 1923 painting entitled The Liffey Swim, which won him a silver medal at the Art competitions at the 1924 Summer Olympics. This can now be viewed in the National Gallery of Ireland.