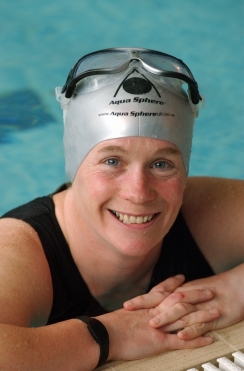 Dr. Julie Bradshaw MBE, the second person to complete an all-butterfly crossing of the English Channel

Dr. Julie Bradshaw MBE is a 2006 inductee in the International Marathon Swimming Hall of Fame. She holds 14 world records for long distance and Channel swimming dating from 1979. She was awarded MBE in New Years Honours list 2006 for “Services to swimming and charity”.

Since the age of 15 years old, Bradshaw has raised many thousands of pounds for charity. The money raised from Channel swim in 1979, began the Fylde Hospice in Blackpool. She serves as a Director on the Board of The Channel Swimming Association where she is also the Assistant Secretary.

Bradshaw is a qualified Teacher and Swimming Teacher and lectures part-time at Loughborough University in the Sport and Exercise Department. She is also a Professional Psychological Therapist/Counsellor, and a Coach and Trainer of NLP, Time Line Therapy and Hypnosis. Bradshaw is a member of the British Association of Counselling and Psychotherapy (BACP) and is CRB checked. In her spare time, she is Secretary of the Channel Swimming Association Ltd., where she shares her experience and expertise, enabling swimmers to achieve their dream of swimming the English Channel.

Alongside her swimming, she works part-time as a PE Lecturer at Loughborough University and is a Counsellor with Open Door (Young People’s Service) and a College in Loughborough. She also runs her own successful private Counselling and Therapy service. In addition, she is a Motivational and After Dinner Speaker, traveling the country inspiring others with her talks and stories.

Her reputation had earned her several prestigious Honours. In 2004 she was nominated for the Sunday Times Inspirational Award and in 2006 Bradshaw was awarded an MBE for her ‘Services to Swimming and Charity’ and the same year Loughborough University in recognition of her outstanding achievements conferred upon her an Honorary Doctorate. And 2007, saw Julie recognized further with a place in the International Marathon Swimming Hall of Fame in Fort Lauderdale, USA.

Bradshaw continues to excel in sport and this excellence extends into all other areas of her life. She gains great pleasure out of helping children, students, adults and athletes, watching them transform their lives and maximizing their potential.

Bradshaw was a member of the Taupo x 3 relay, a three-way crossing of Lake Taupo by a 5-person male team and a 6-person female team of experienced open water swimmers in January 2009. The Taupo x 3 relay teams set a world lake swimming record by completing a 126 km (78.2 miles) triple-crossing of Lake Taupo, the largest lake in New Zealand under organisers Chris Palfrey, Penny Palfrey, and Julie Bradshaw. The swim started at 5:33 am on 5 January 2009.