White Cliffs of Dover and the Strait of Dover as seen from Cap Griz Nez, France 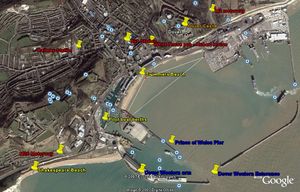 Dover is a town and major ferry port (Dover Harbour) in the home county of Kent, in South East England. It faces France across the narrowest part of the English Channel, and lies south-east of Canterbury; east of Kent's administrative capital Maidstone; and north-east along the coastline from Dungeness and Hastings. The town is the administrative centre of the Dover District and home of the Dover Calais ferry through the Port of Dover.

The surrounding chalk cliffs have become known as the White Cliffs of Dover, and the narrow sea passage nearby – the Strait of Dover. Its strategic position has been evident throughout its history: archaeological finds have revealed that the area has always been a focus for peoples entering and leaving Britain. The name of the town derives from the name of the river that flows through River Dour. The town has been inhabited since the Stone Age according to archeological finds, and Dover is one of only a few places in Britain – London and Cornwall being other examples – to have a corresponding name in the French language, Douvres.

Dover is the gathering place for individuals training for and attempting an English Channel crossing.