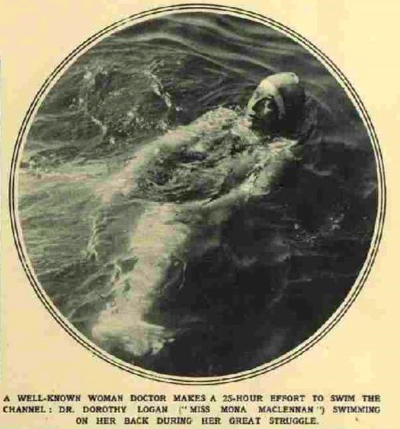 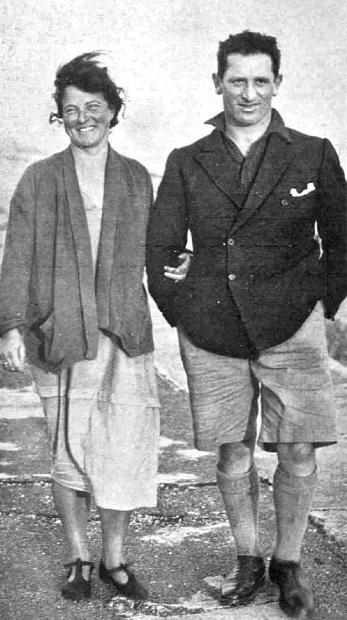 Dr. Dorothy Cochrane Logan or Mona MacLellan, her pseudonym was born in Dublin, Ireland in 1888 and died in Whitianga, New Zealand on 19 July 1961. In 1929 she married in Wandsworth her trainer and English Channel swimmer Horace Carey, 8 years her junior and a driver for East Kent Buses. They lived at Hythe. Dorothy was a gynecology specialist in London. She had met Carey in 1925 when both were training to swim the English Channel. During World War II from 1939, she served as a surgeon at the Swandean Isolation Hospital in Worthing, Sussex and emigrated with her daughter to New Zealand after the World War II.

Dr Logan had previously swum under the name of Mona McLellan because she wanted to keep her professional and swimming lives separate. She had tried the English Channel crossing twice before, but failed. Carey said it had been a last-minute decision taken because the conditions were just too good. The waters were smooth and warm. Through the night, pausing only for some beef tea, Dr. Logan swam mostly backstroke.

She made excellent progress and climbed out of the waters near Shakespeare’s Cliff at 8:50 am, apparently breaking Gertrude Ederle’s record 1 hour 13 minutes.

The News of the World summoned Dr Logan to London the following day to present her with £1,000. The paper’s owner, Lord Riddell, had offered for any British woman who could better Ederle’s time. An affidavit was placed before the new record holder: “I, Dorothy Cochrane Logan of Harley Street, in the county of London, do, at the office of The News of the World to claim their £1,000 prize, solemnly and sincerely declare…” to whit, that she swam the whole way, that she never left the water, that she had no physical assistance, and that she hadn’t been towed in any way. She signed it and walked out with the money, and the newspaper wired its exclusive to the world.

The following Monday, 17 October, Dr Logan called upon Sir Emsley Carr, editor of the News of the World. “Sir Emsley, do you believe I swam the Channel?” The editor nodded. “Well,I did nothing of the kind and I want you to tell the world.” What was quickly labeled ‘the Hoax of the Century’ all began as some good-natured chaff. Channel swims were ‘the thing’ that year. In good weather, there might be a half dozen swimmers in the water at any time. So many, apparently, that a ‘hazard to navigation’ warning was issued in the Dover Strait.

Dr Logan admitted that she, tainer Horace Carey and a few others were sitting around in Hythe discussing the complete lack of any rules or governing body to authenticate a Channel swim. Why, anyone with a swimming costume could wade into La Manche then bob up in old Blighty and claim a new record. “Let’s do this,” someone said, as someone always will. Before the fact, Dorothy wrote her “manifesto”: “I intend to get across somehow with the purpose of proving the necessity of independent umpires to prevent possible abuses.” She mailed one copy to her office in Harley Street and the other went into the hotel safe in Hythe.

Carey had kept a private, detailed chronology of the crossing. Dr Logan had, in fact, entered the water, fully greased, at 7:40 on Monday evening. What was not previously acknowledged was that, two hours later, at 9:30 am, Carey “took swimmer out of the water”. Dorothy, who was a much better swimmer than a sailor, then spent several seasick hours, wrapped in a rug in a little cabin below deck with “a vile and wicked stove”. Then, at 6:20 am, the diary laconically reveals,“swimmer re-greased & entered water three miles s-e from S Foreland Lighthouse”. It was broad daylight, but they were unobserved. So strong was the tide and the current that Dr Logan had to tread water so as not to arrive too soon and spoil the hoax.

The news was stunning.“The mysterious medico” went into hiding, insisting that her object had been achieved. Until the Channel Swimming Association set procedures and authentication standards, no records can have any validity. “I am sure the end will justify the means,”said Dorothy. To her credit, she’d never cashed the cheque for £1,000, but took it to her bank in Harley Street and signed it back to the account of the newspaper.

On 7 November 1927, Dr. Logan was fined £100 and £10 10s costs for swearing to a false affidavit, “treating with contempt and ridicule an important part of our legal system”. The BMA. went from honouring her at dinner to making a bid to strike her off the Medical Register. At her hearing, she told her fellow physicians: “I am sorry I was such an idiot.” They did not expel her, but censured her, declaring that she “imperfectly realises the importance of a doctor’s signature”.