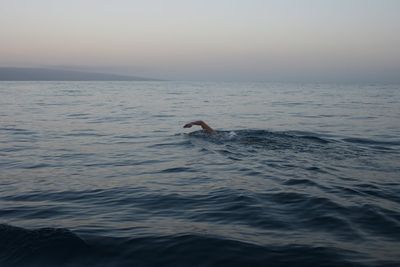 He completed a Strait of Gibraltar crossing on 1 May 2017 in a tandem swim with Anthony McCarley in 4 hours 26 minutes.

The LoneSwimmer.com blog is the voice and words of Donal Buckley who gives swimmers around the world ample and emotional reasons to pull for him, although most have never met him.

LoneSwimmer inspires, educates and makes people smile and think with profound prose and a unique perspective. Buckley takes difficult topics and makes them simple. He takes unknown issues and makes them engaging. He tackles the concept of marathon swimming with zest and vigor and a uniquely educational and entertaining point-of-view.

Buckley simply makes the global open water swimming world a better place. His topics range from physical to psychological, from hypothermia to injuries, from training to its impact on daily life. He is introspective, intellectual, interesting and intriguing from his lone outpost in the southeast of Ireland.

LoneSwimmer was selected as the Best Irish Sports and Recreation Blog in both 2012 and 2014 by the Blog Awards of Ireland.

Buckley has twice been nominated for the WOWSA awards, in both 2012 with co-founder Evan Morrison for the Marathon Swimmers Forum and 2014 with Sam Krohn for the open water swimming film Uaimh an tSolais & Uaimh na nÉan. Buckley also appears on the 2012 & 2013 WOWSA Most Influential Men in Open Water Swimming lists.

"I’m an Open Water swimmer living in the South-East of Ireland. I’ve been swimming Open Water for some years, on the south-East & southern Irish coasts.

Marathon swimmers would never complete any swim without the help and assistance of family and friends and volunteers to whom we owe so much, putting our lives and dreams in their hands. Almost everything about Open Water that I know, I’ve learned the hard way. I don't like hoarded knowledge for ego so I like to share what I’ve learned. Mostly therefore, I’ll write about what I know and have experienced.

Your mileage may vary. You may have conflicting opinions. For open-water swimming, it’s all about the mind."

Buckley's Video of the English Channel[edit]

The English Channel is not always this way, but Buckley captured Dover Harbour on a particularly rough day:

Uaimh an tSolais & Uaimh na nÉan (Cave of the Light & Cave of the Birds) is a short film by Sam Krohn with Donal Buckley that was shot in one take on the Copper Coast along Tramore Bay on the southern coast of Ireland.

"The undulation of the underwater, the oscillation of the ocean, the charm of the coastline. These are the natural phenomena that attract individuals around the world to the open water. Sam Krohn, like many of his fellow Australians and open water swimmers worldwide, possesses a deep connection with the sea; his instincts and insights into the raw beauty of the marine environment and the pure joy of open water swimming is captured in Uaimh an tSolais & Uaimh na nÉan, a film inspired by Donal Buckley and shot in one take on the Copper Coast along Tramore Bay on the southern coast of Ireland. For filming from seaside caves and a swimmer’s perspective at the water’s level, for simply yet profoundly highlighting a special place that has been explored by relatively few humans, for documenting the sights, sounds and emotions of one representative lone swimmer in the sea, Uaimh an tSolais & Uaimh na nÉan or Cave of the Light & Cave of the Birds is a worthy nominee for the 2014 World Open Water Swimming Offering of the Year."

The work of Buckley is featured on the cover and the month of December in the 2015 MSF Calendar.