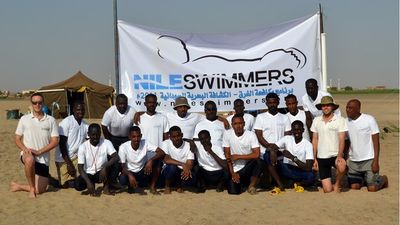 Dominic Roberton is a co-founder of the Nile Swimmers and has played an active role in British University Life Saving Clubs’ Association. Having qualified as a pool lifeguard in his late teens, the world of competitive lifesaving opened his eyes to new standards and improved training methods. Whilst acting as a club coach for his university team and being blessed with a number of exceptional athletes, he introduced a coaching system which produced consistently improving skills for the athletes and consistent success in competition. Since 2009, he has been focused on conducting engineering research and as such this is his first lifesaving involvement since the beginning of his hiatus.

Nile Swimmers is a pod of open water swimmers and lifeguards in Sudan that train lifesaving and swimming instructors who live alongside the Nile River in Africa. The Nile Swimmers is a registered UK charity (number 1152395) administered by a trustee board. The UK arm of the organisation provides technical and fundraising support to the Nile Swimmers Project and Alliance.