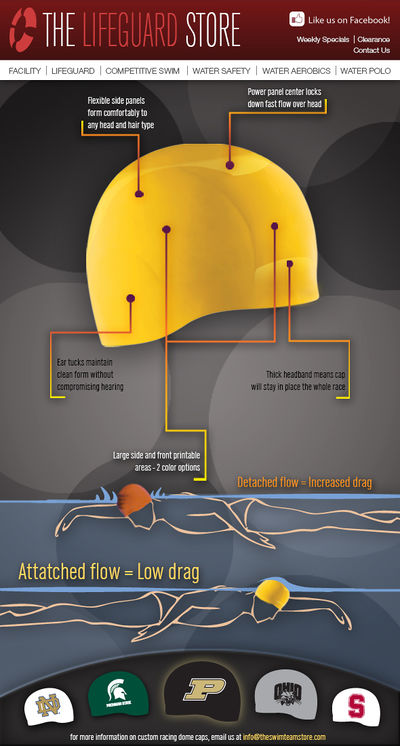 noun - Dome swim cap is a swimming cap made of wrinkle-free 100% silicone with 3D molding technology. The dome swim caps offered by several different manufacturers offers a high compression which helps reduce drag and provides a better fit. The models also have a sticky polish on the inside that won't stick to the swimmer's hair and makes the cap easy to get on and off. The dome swim caps are primarily used by competitive pool and open water swimmers.

Swim caps are worn for various reasons. Some facilities require the wearing of swim caps, in order to protect filters from becoming clogged with loose hairs which fall from the head of swimmers who are not wearing a cap. Caps are also sometimes worn in an attempt to keep the hair relatively dry or free from chlorinated water, and to keep the sun off the hair, as well to keep one's hair in place and off the face when swimming. Dome swim caps are also primarily used to reduce drag in the water and to keep the wearer's head warm in the open water.