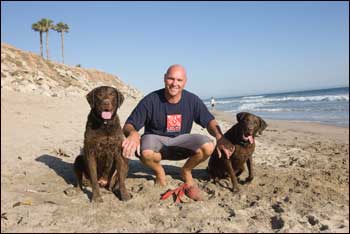 Dog Beach is in the city of Huntington Beach in Orange County in Southern California, U.S.A. The city also has dog bakeries, dog specialty shops, dog parks and upscale dog-pampering hotels — and is one of the best dog beaches in California where dogs are allowed to play in the water.

Dog Beach is over one mile of pooch-paradise, where canines go to unleash hours worth of running, playing, swimming, digging, barking, sunbathing and even surfing with their human friends. Dogs chase balls, dig holes, and frolic in the water.

It is site of the annual SoCal Corgi Beach Day in October.

The city of Huntington Beach (Surf City USA® or Surf City USA) is located along the Southern California coast in Orange County, about 40 miles south of Los Angeles and about 90 miles north of San Diego. With a population near 200,000, it is among the nation's safest cities and often ranked among the Top Ten Safest Cities by City Crime Rankings.

Huntington Beach covers 28 square miles of land, 26 square miles of water where there are numerous open water swimming courses, and is one of the 20 largest cities in California. With 8.5 miles of uninterrupted, soft white sand beach along the Pacific Ocean, the city also plays host to an annual visitor population of more than 16.3 million people, with the greatest attendance during summer, special events and weekends.

Founded in the late 1880s, Huntington Beach was incorporated as a Charter City in 1909.

Huntington Beach's 8 miles is the longest stretch of uninterrupted beachfront anywhere on the West Coast.

Huntington Beach’s beaches are perfect for barefoot strolls, ocean swims, sitting by the glow of a late night bonfire, surfing on some of the world’s best-breaking waves; building sandcastles, and walking with your dog.