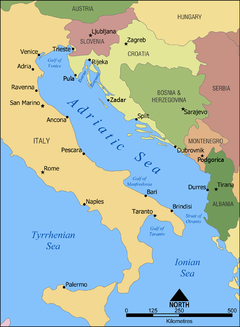 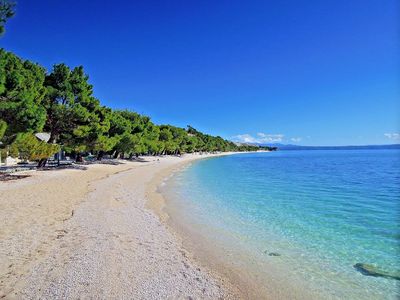 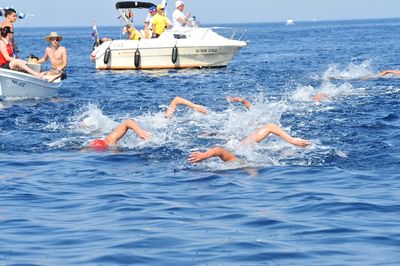 Faros Maratón in Stari Grad Bay on the Adriatic Sea 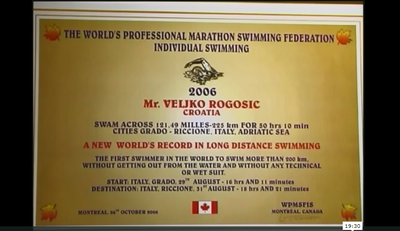 noun - Adriatic Sea (Albanian: Deti Adriatik, Bosnian, Croatian and Montenegrin: Jadransko more, Italian: mare Adriatico, Slovene: Jadransko morje) is a body of water separating the Apennine Peninsula of Italy from the Balkan peninsula and the Apennine Mountains from the Dinaric Alps and adjacent ranges. The Adriatic Sea is the northernmost arm of the Mediterranean Sea, extending from the Strait of Otranto (where it connects to the Ionian Sea) to the northwest and the Po Valley.

The countries with coasts on the Adriatic are Albania, Montenegro, Bosnia-Herzegovina, Croatia, Slovenia and Italy. The Adriatic contains over 1,300 islands, mostly located along its eastern, Croatian, coast. It is divided into three basins, the northern being the shallowest and the southern being the deepest, with a maximum depth of 1,233 metres (4,045 ft). The Otranto Sill, an underwater ridge, is located at the border between the Adriatic and Ionian Seas. The prevailing currents flow counterclockwise from the Strait of Otranto, along the eastern coast and back to the strait along the western (Italian) coast.

Tidal movements in the Adriatic are slight, although larger amplitudes are known to occur occasionally. The Adriatic's salinity is lower than the Mediterranean's because the Adriatic collects a third of the fresh water flowing into the Mediterranean, acting as a dilution basin. The surface water temperatures generally range from 24°C (75°F) in summer to 12°C (54°F) in winter, significantly moderating the Adriatic Basin's climate.

It is part of the Seven Seas.

Veljko Rogošić completed a solo marathon swim, 225 km (139.8 mile) in distance in 50 hours 10 minutes across the Adriatic Sea from Grado, Croatia to Riccione, Italy in 2006.

Lewis Pugh completed one leg of his Seven Swims In The Seven Seas For 1 Reason in the Adriatic Sea in August 2014.