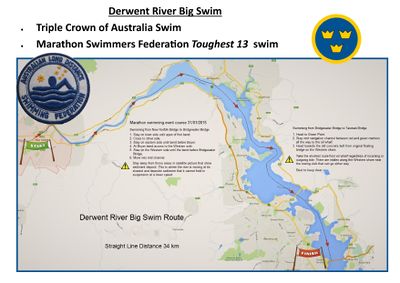 The Big Swim Derwent River Marathon or The Big Swim (Tasmania) or Derwent River Big Swim or The Big Swim - Derwent River Marathon is a 34 km marathon swim that starts from the New Norfolk Bridge and finishes at the Tasman Bridge in Hobart along the River Derwent in Tasmania, Australia. The water temperature ranges from 13-15°C (55-59°F) and the river is subject to strong winds against the swimmer and escort craft that blow from Antarctica. No full body fast suits are allowed; only swim briefs and no wetsuits. The event is under the authority of the Australian Marathon Swimming Federation and one of the World's Top 100 River Swims, managed by Doug Hughson.

There are numerous courses swum on this great river Derwent, across, up and down the river. There are three bridges used as starting and finishing lines.

The history on the Derwent swims is therefore not restricted to one course and a few swimmers. There are many swimmers and courses. Since the beginning in 1973 when the Australian Long-Distance Swimming Federation was formed, 46 swimmers have competed in the various races in the Derwent at marathon distance.

The body was run by volunteers who in fact underwrote the sanctioned events both financially and with manpower. The organisers provided accommodation, boats, watercraft & personnel.

A number of swims have commenced and continue in the Derwent River, but most are not of marathon distance. There are other swims across the river of about 2-5 km. One of which is the Trans Derwent Royal Hobart Regatta Race 1.5k which is the second oldest continuously run race in Australia. Other distances across the river reach 5k. The 15k event from Kingston Beach to Constitution Dock Hobart. Other swims have commenced in Hobart and finished in Kingston and/or in the opposite direction. One of our swims the Kingston to Hobart 15km was the Australian Championship race.