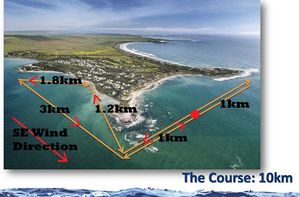 The Deep Blue Invitational Swim is considered by many to be the toughest swim in South Africa outside of a Robben Island crossing. 30 of South Africa's most accomplished extreme swimmers are invited to swim 10 km at Shelley Point in the cold waters near St Helena Bay.

The event also features a 3 km event and is organized by The Ripple Effect in association with Shelley Point Hotel Spa and Country Club and Realtors International. Water temperatures range between 11–14°C.

"We invite only the most committed, dedicated and passionate open water swimmers who have a proven record in long distance extreme swimming," said organiser Tony Enderli. "An impressive field of swimmers have accepted their invitations including Ram Barkai, Phil Emslie, and Brenton Williams.

The event benefits Dale Buddies, a social investment project overseen by the Shelley Point Hotel Spa and Country Club. In 2011 the funds raised for Dale Buddies from the Deep Blue Invitational were used to teach swimming and life skills to young children living in the underprivileged areas in St Helena Bay.

The 2012 Deep Blue Invitational Swim was shortened to 8 km due to the cold and wind. Lisa Cowling won the event in 2 hours 24 minutes over 13 other South African extreme swimmers.