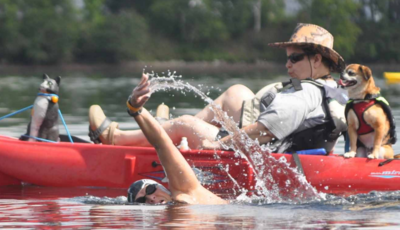 "She was an integral contributor in the growth of Vermont Open Water Swimming from 2009 onwards when she began kayak support of open water swimmers based in Vermont. Her can-do attitude and kayak support was valuable to many open water swimmers in Vermont whether it be spotting, kayak support or a friendly wave on the lake during marathon swim training, marathon swims or ice swims. In 2009 she was a kayaker for the first Northeast Kingdom Open Water Swimming Association (NEKOWSA) event, she continued to kayak for NEKOWSA swims in support of Paula Yankauskas from 2009- 2016, including multiple Son of a Swims, Border Buster swims and Swim The Kingdom Weeks. She was well-known for her kayak crew – Cat Stanley as figurehead on the front of her kayak along with her dog Picard. Her kayak support extended far beyond Vermont waters. She was part of the first Vermont contingent of swimmers and kayakers that journeyed to Arizona for SCAR in 2014, and she returned there in 2015 and 2016 kayaking for Paula Yankauskas. She also kayaked Swim The Suck in Tennessee in 2016 and made significant crew contributions. Most notable, her crew support of Paula Yankauskas’s English Channel crossing in 2016 enabled her to set the record for the oldest American woman to swim the English Channel at the time. In 2011 she was crew for Charlotte Brynn during the first 25.2 mile In Search of Memphre, which re-established international swimming on Lake Memphremagog at a time it was widely believed that the border was closed to swimming. Deborah crewed yet another record-breaking swim in 2014 when she and Cynthia Needham crewed for Paula Yankauskas during In Search of Memphre when Yankauskas became the oldest swimmer to make the crossing. Beier and Yankauskas were a team and a force as they took on lakes, rivers and sea channels together. Beier passed away in 2017, a sad loss for Vermont Open Water Swimming."