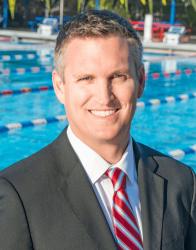 Dawson Hughes, CEO of US Masters Swimming and a native of Newport Beach, California

Dawson Hughes is an American masters swimmer from Sarasota, Florida where he swims for the Sarasota Y Sharks. He serves as the chief executive officer of U.S. Masters Swimming as of March 2016. He leads the National Office staff in providing support for the organization’s 65,000 members, coaches, instructors, partners, volunteers, and Local Masters Swimming Committees.

A native of Newport Beach, California, Dawson grew up in and around the water and began swimming year-round at the age of 8. He graduated from the University of Michigan with a bachelor of arts degree in political science where he swam for the Wolverines for two years.