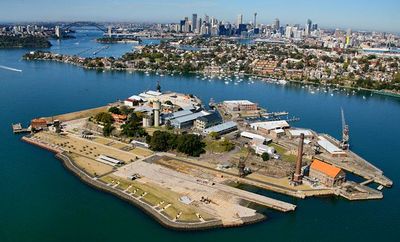 Cockatoo Island in Sydney Harbour, Australia, site of the Dawny To Cockatoo Swim

Dawny To Cockatoo Swim is a 2.4 km open water swim in Sydney Harbour, Australia from the Dawn Fraser Pool at Balmain around Cockatoo Island, and back. The shorter 1.1 km course is to Cockatoo Island and back. After the swim, breakfast featuring sausage, egg rolls and fresh fruit is served.

Swim from the Dawn Fraser Pool at Balmain to or around Cockatoo Island and back, depending on the distance.

Cockatoo Island is a UNESCO world-heritage site. In Sydney’s early years, it operated as a gaol (jail) and held convicts who had reoffended after arriving in Australia. It was proclaimed as a UNESCO world heritage site in 2010 because of its significant place in Sydney’s history.