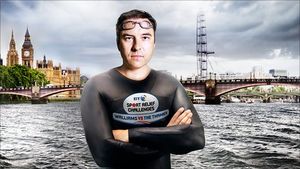 David Walliams is a comedian who is also a marathon swimmer. He planned the Big Splash Challenge for Sport Relief, a 140-mile, 8-day stage swim for charity from the Thames’ Gloucestershire source (near Lechlade) to the finish at Big Ben in central London in eight days. It will be the basis for a television documentary to be aired in 2012.

In 2006, Walliams completed a swim across the English Channel, raising £1,000,000 for Sport Relief. He later received a special award at the BBC's Sports Personality of the Year for completing the Channel. He also swam the Strait of Gibraltar from Spain to Morocco for Sport Relief in 2008, and last year cycled from John O'Groats to Land's End.

In the Big Splash Challenge for Sport Relief, Walliams is raising money for the BBC-backed charity which helps people in the U.K. and in some of the world's poorest countries.

He won the Charity Swim of the Year award at the 2012 H2Open Awards organized by H2Open Magazine, an award designed to celebrate achievement in open water swimming.