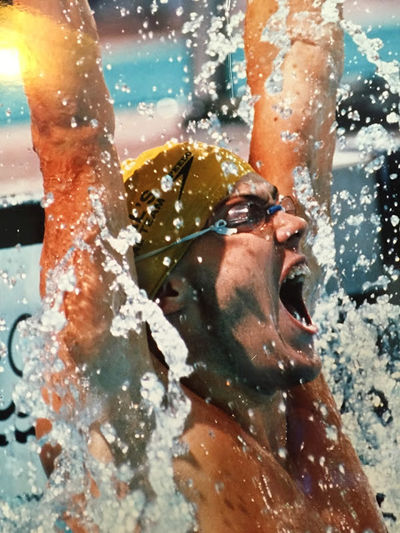 David Charles Berkoff (born 30 November 1966) is an American former competitive swimmer, Olympic champion, former world record-holder and currently an attorney and administrator for USA Swimming. Berkoff was a backstroke specialist who won a total of four Olympic medals during his career at two different Olympic Games. He is best known for his powerful underwater start, the eponymous "Berkoff Blastoff".

At the 1988 Summer Olympics in Seoul, South Korea, he won a gold medal by swimming the backstroke leg for the winning U.S. men's team in the men's 4x100-meter medley relay. Individually, he also won a silver medal by placing second in the men's 100-meter backstroke event.

Four years later at the 1992 Summer Olympics in Barcelona, Spain, Berkoff earned another gold medal by swimming for the winning U.S. team in the preliminary heats of the men's 4x100-meter medley relay. He also won a bronze medal by placing third in the 100-meter backstroke.

Berkoff was inducted into the International Swimming Hall of Fame as an Honor Swimmer in 2005.

Berkoff invented the Berkoff Blast, a revolutionary racing start for backstroke where the swimmer traveled long distances under water.