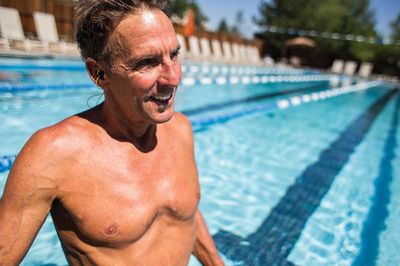 Dave Scott (born 4 January 1954) is an American triathlete, masters swimmer and the first six-time Ironman Triathlon Hawaii Champion (1980, 1982, 1983, 1984, 1986, and 1987). In 1994, at age 40, he won second place at the Hawaii Ironman World Championships, very nearly winning for a record-breaking seventh time. In 1996 at age 42, he returned again to place 5th, running the marathon in 2:45. Scott works as a triathlon coach, fitness consultant, motivational speaker, commentator, and corporate consultant. In 1986, he published his book Dave Scott's triathlon training Since 1999, Scott has been the head coach for Team in Training, helping to certify TNTcoaches nationwide.

In 1993, Scott was the first person inducted in the Ironman Hall of Fame. He is known by the nickname "The Man" for his intense training regimens and his unrelenting race performances that created a record number of wins.

Scott grew up in Davis, California. By middle school, he played basketball and football. He was a water polo player at Davis High School and UC Davis, where he began to focus on competitive swimming. Scott competed and twice won the Waikiki Roughwater Swim (1978 in 54:13 and 1979 in 50:00).

In 1978, US Navy Commander John Collins created the Ironman out of existing races, including the Waikiki Roughwater Swim. Scott heard about the race from a Sports Illustrated.

Scott ran his first Ironman in 1980 and finished in 9:24:33, a time and approach is widely considered to have changed the Ironman from a test of endurance to a race. Scott returned for the next race and finished second. In 1983, Scott won in what was Mark Allen's first Ironman. In what would become a renowned rivalry, Scott would win 3 of the next 4 Ironmans over Allen.

Scott has stated that he is most proud of his performance in 1994. Another second-place finish, Scott was 40 years old at the time so his race was considered to be a revolutionary feat. Two years later, Scott finished fifth overall. 2001 was his last foray into the Ironman. The 47-year-old Scott had back problems due to some last minute bike changes, which forced him out of the race.