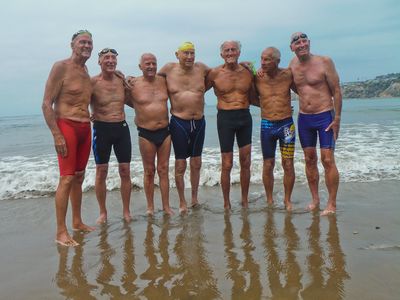 David Radcliffe is an 82-year-old American competitive swimmer and open water swimmer from San Diego, California who lives in Oregon and 1956 Melbourne Olympic 1500m freestyle swimmer. He was an All-American swimmer at San Diego High School and the University of California at Berkeley who participated in the record-setting Old Men and the Sea Relay, a group of octogenarian relay American open water swimmers who crossed the Catalina Channel on 20 August 2015 in 12 hours 15 minutes from Santa Catalina Island to the Palos Verdes Peninsula. Its relay is nominated for the 2015 World Open Water Swimming Performance of the Year by the World Open Water Swimming Association.

He was inducted in the International Masters Swimming Hall of Fame in 2015.

The Old Men and the Sea Relay Members[edit]