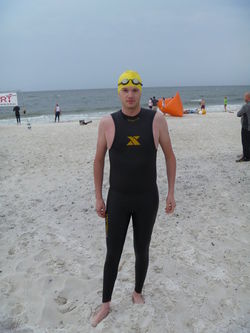 Danny Gassaway (born May 25, 1980)is an open water swimmer and triathlete in Tulsa, Oklahoma.

Danny has been swimming since he was 18. He was introduced to the water by his mother. At the time, he played hockey, and was a competitive speed skater. He thought swimming was a joke. It became a challenge, and eventually a lifestyle. Since then, Danny has coached competitive USA Age Group, YMCA, and high school swim and dive. In 2007, Danny swam outside all winter long in Oklahoma to raise money for the Peace of Mind Foundation. Danny, who also has Obsessive Compulsive Disorder wanted to prove to people that anyone can do anything as long as they push themselves hard enough. While being an open water swimmer, he has competed in triathlons, ultra distance cycling, and running events.