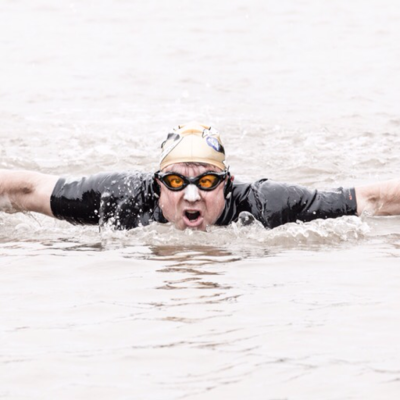 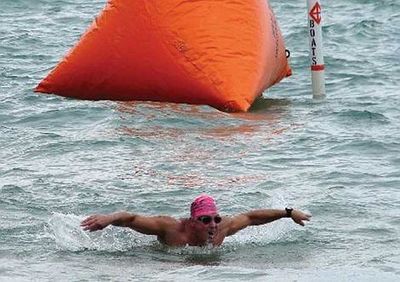 Dan Projansky (also known as Mr. Butterfly), is a 59-year-old American extreme ultra-marathon swimmer from Grayslake, Illinois who does butterfly on his open water swims including the 8.2-mile (13.2 km) Swim4Freedom event in Geneva Lake, Wisconsin, and the 36 mile Extreme North Dakota Watersports Endurance Test (END-WET) in the Red River.

It takes power. It takes guts. It takes strength from the shoulders to the abs. It is dramatic as the body is propelled out and forward in the water. Butterfly is the most unforgiving and difficult of all swimming techniques in the open water. But Dan Projansky is powerful, strong and dramatic. After doing butterfly 9-miler at Swim4Freedom, Projansky was interested to see how far he could possibly take his butterfly goals. With a year of mental, physical and logistical preparation, he set his goal to complete the Extreme North Dakota Watersports Endurance Test (END-WET) without once breaking his stroke. Extreme is an understatement as the 27-mile (43 km) race in North Dakota and Minnesota took the Chicagoan 14 hours 30 minutes. For his double-arm stamina, for his enthusiasm to push his boundaries at physiological and psychological levels, for his full marathon of butterfly, Dan Projansky’s END-WET butterfly swim is a worthy nominee for the 2012 WOWSA Open Water Swimming Performance of the Year.

Projansky was named to the 2014 list of the World's 50 Most Adventurous Open Water Men determined by the World Open Water Swimming Association. The honorees are presented alphabetically by their last name.

Open Water Source: How does a 10 km butterfly feel in the open water?

Projansky: During the 10 km, after the race, my lower part of my spine, by my butt, hurts a little. Every so often my biceps hurt, but it's usually only after I complete my training. I am very fortunate in that my shoulders are quite limber.

Open Water Source: What is your average workout like?

Projansky: I'm doing indoor training now in the winter here in Chicago. I swim all butterfly each time I hit the health club or the Lake Geneva Wisconsin YMCA. I usually swim for two and half hours or so. One morning each week, I get out of bed at 3:20 am and get to the LifeTime Fitness Club in Skokie, Illinois and swim from 3:50 am to about 5:45 or 5:50. I know it's pretty much about 3.75 miles or so. The toughest part is making it through the day at work. I look at this as mental training; because the 8 miler in Wisconsin [that I will do this summer] will certainly test me mentally. During the summers I train at Fontana, Wisconsin. There I swim from pier to pier and just go back and forth. Each length might be about 200 meters or so, maybe longer. I also swim in Lake Michigan and the beaches here in Evanston, Illinois. I like training in chop and waves because I feel it's the best way for me to complete open water training. I dedicate my indoor gym workouts to butterfly swimming, too. I specifically target muscles for the stroke and I have been doing this for many years.

Open Water Source: That is not normal.

Open Water Source: What are your plans for this summer?

Projansky: I am training for a 8-mile swim in Wisconsin this August. It will be a direct shot across Lake Geneva, which is one of the deepest lakes in the state. It is being put on for a fund-raising event to raise money for kids of parents who were killed in the war, called Swim4Freedom.

Open Water Source: Are you ready for it?

Projansky: My longest swim was the Coastal Crawl in Lake Michigan last summer. I did that all butterfly in 4 hours and 18 minutes, but I wore a shortie wetsuit. For the 8-mile Swim4Freedom, I will wear either a speed suit or just a Speedo. I will be 52 years old this August, so I am not sure if that makes me the oldest butterfly swimmer to ever try something like this. I know there is another guy here in Illinois who swims the 5K Big Shoulders swim all butterfly every September.

Open Water Source: How did you feel about it?

Projansky: I would say the 10 km butterfly was my ultimate athletic achievement. It's a gut-check in the lake. I received a standing ovation from the volunteers and spectators; all the kayakers surrounded me in a circle," he said. "It was pretty motivational and overwhelmed me on a personal level.

Open Water Source: How many of these all-butterfly open water swims have you done?

Projansky: Six. If I stopped doing butterfly, I would get in a boat and call it a day.

Projansky: In the late 1990s and early part of this decade, I was becoming frustrated with my freestyle. I'm a competitive person and I'm very hard on myself. Why do all this swimming and be upset about it? At one point in my mid 40s, I had to reinvent myself. At the Big Shoulders race in Chicago, I noticed someone swimming all butterfly, so I decided to try that. I tried it and was immediately hooked and intrigued by the challenge.

Open Water Source: Do you do anything special to prepare, other than 3:50 am workouts?

Projansky: I've worked single-mindfully in training to target the correct muscles. My endurance base from the triathlons helps me and I have a strong upper body. My arms are flexible and I can stretch out and be taller in the water. All those things help.

Open Water Source: It is obvious that you enjoy butterfly...

Projansky: I don't know what drives me to do it. I've developed a smooth rhythm and it relaxes me. When you're in the open water, you can see the fish, the plants and the sun come up. There's nothing like it.

Photo above shows Projansky at the 2009 10K Coastal Crawl in Harbor Springs, Michigan courtesy of the Pioneer Local.

Dan Projansky (U.S.A.) Butterflying Marathoner
Dan Projansky has been flying for much of his adult life. His latest butterfly effort was a 36-mile (57.9 km) 15 hour 22 minute down the Red River between North Dakota and Minnesota. The mild-mannered banker from Chicago trains butterfly in a pool just like his races in the open water - straight, non-stop, uninterrupted double-arm pull with a steady dolphin kick. For his freshwater butterfly effort in muddied waters, for his 15+ hours of non-stop butterfly, and for his love of the toughest, roughest stroke on the planet, Dan Projansky's END-WET swim is a worthy nominee for the 2015 World Open Water Swimming Performance of the Year.