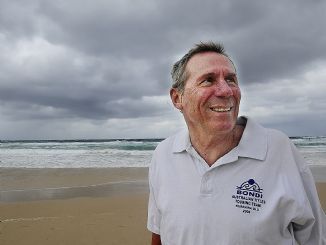 Cyril Baldock, English Channel swimmer at the age of 70 years 9 months whose crossing was nominated for the 2014 World Open Water Swimming Performance of the Year

Cyril Baldock is an Australian open water swimmer from Bondi Beach in Sydney.

Baldock's English Channel crossing at the age of 70 years and 9 months is nominated for the 2014 World Open Water Swimming Performance of the Year.

"Not only did Cyril Baldock break one of the most difficult records in the channel swimming world, but he also completed his swim-for-the-ages extremely quickly. Baldock did a fast 12 hour 45 minute crossing from England to France and broke the world record for the oldest individual to complete a traverse of the English Channel. This was Baldock’s second record in the English Channel; the first came in 1993 when he was a member of the four-way Sun Rice Australia relay and took 42 hours 11 minutes to swim between English and France 4 consecutive times. 29 years after his first crossing, Baldock looked a man one-third his age. Humorous, cheerful and optimistic, the life member of Bondi Surf Bathers' Life Saving Club and 7-time national surf-swim and rescue/resuscitation champion, is a man comfortable in the sea. For his speed and stamina, for his comfort in rough waters at an advanced age, for his inspirational swim at the age of 70, Cyril Baldock’s crossing of the English Channel is a worthy nominee for the 2014 World Open Water Swimming Performance of the Year."

Baldock was named to the World's 50 Most Adventurous Open Water Men in 2017 (alphabetized by last name) by the World Open Water Swimming Association: