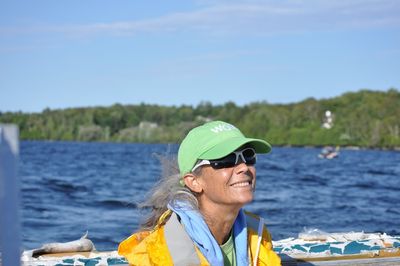 Cynthia Needham is a 69-year-old kayaker from Hyde Park, Vermont who served as a support crew for Paula Yankauskas during her 25-mile (40 km) In Search of Memphre marathon swim on 5 September 2014 that took 19 hours 55 minutes. She escorted Charlotte Brynn on her 16.5-mile border crossing swim between Newport, Vermont, USA and Île Ronde, Quebec, Canada.

She was elected as a Contributor and Crew in the Vermont Open Water Swimming Hall of Fame in its inaugural Class of 2017 as she served as a Contributor and Crew in numerous Northeast Kingdom Open Water Swimming Association events including Sarah Thomas' 50-mile double crossing In Search of Memphre in 2013 and Charlotte Brynn’s many swims on Lake Memphremagog and on seven marathon swims (and attempts) from California to New York and England.