(Redirected from Cuba to Mexico)

Susie Maroney, only person to swim from Mexico to Cuba 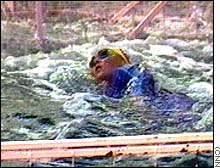 Susie Maroney swimming from Mexico to Cuba in 1998

Susie Maroney OAM (born 15 November 1974 in Cronulla, New South Wales), an Australian former marathon swimmer and channel swimmer who was inducted in the International Marathon Swimming Hall of Fame in 2005 as an Honour Swimmer, is the only person to swim from Isla Mujeres, Mexico to Las Tumbas beach, Cuba across the Yucatan Straits. Her 197 km (122 miles) swim took 38 hours 33 minutes on 1 June 1998. She wore a special Lycra stinger suit and swam much of the swim in a shark cage with a protective jellyfish net to protect against sharks and jellyfish in a solo swim coordinated by Joe Pignatiello.

She had intended to swim a total of 145 miles (233 km) from Isla Mujeres in Mexico to Maria La Gorda in Cuba, but ended on Las Tumbas beach instead.