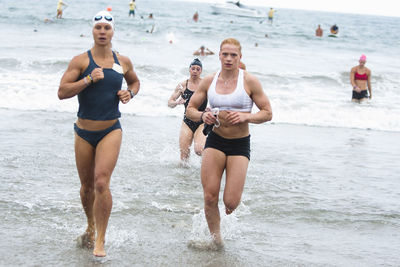 noun - CrossFit is a popular fitness concept and company with over 10,000 locations worldwide. CrossFit tests athletes in various athletic elements including high-intensity interval training, weightlifting, plyometrics, powerlifting, gymnastics, kettlebell lifting, calisthenics, and other exercises including ocean swimming. It organizes the CrossFit Games gives the title of the Fittest on Earth™ to both men and women.

At the 2014 Reebok CrossFit Games in Hermosa Beach, California, the individuals competed in the following Beach event:

In the team relay, all 6 members competed in the 1,000-yard ocean swim with a rescue sled where the team had to swim it out 500 yards around a turn buoy and swim it back to shore.

At the 2013 CrossFit Games, the swimming element consisted of 10 x 25 yard swims in a pool followed by 3 bar muscle-ups.

At the 2012 CrossFit Games, participants had to swim 700 yards offshore from Camp Pendleton in Southern California.

In the years before 2011, there were no swimming - pool or ocean - segments in the Fittest on Earth™ competition.