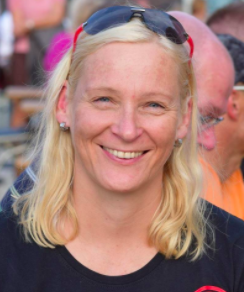 Conny Prasser (born 7 December 1975) is a 42-year-old German endurance athlete, Ironman triathlete, and open water swimmer from Moritzburg, Saxony. She is also an Ice Ironwoman as she has completed both a full Ironman triathlon and an Ice Mile.

She completed two full Ironman triathlons at the Challenge Roth, a triathlon around Roth, Germany held annually in July.