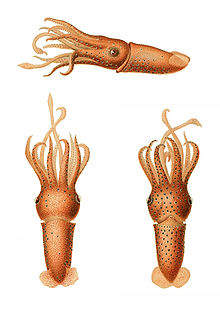 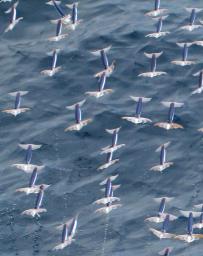 Squid "flying" in the waters near Hokkaido, Japan

noun - Squid are cephalopods of the order Teuthida, which comprises around 300 species. Like all other cephalopods, squid have a distinct head, bilateral symmetry, a mantle, and arms. Squid, like cuttlefish, have eight arms arranged in pairs and two, usually longer, tentacles. Squid are strong swimmers and certain species can "fly" for short distances out of the water.

The main body mass is enclosed in the mantle, which has a swimming fin along each side. These fins, unlike in other marine organisms, are not the main source of locomotion in most species. The skin is covered in chromatophores, which enable the squid to change color to suit its surroundings, making it practically invisible. The underside is also almost always lighter than the topside, to provide camouflage from both prey and predator.

In English-speaking countries, squid as food is often marketed using the Italian word calamari. Squid are found abundantly in certain areas, and provide large catches for fisheries. The body can be stuffed whole, cut into flat pieces, or sliced into rings. The arms, tentacles, and ink are also edible; in fact, the only parts not eaten are the beak and gladius (pen). Squid is a good food source for zinc and manganese, and high in copper, selenium, vitamin B12, and riboflavin.

The colossal squid (Mesonychoteuthis hamiltoni, from Greek mesos (middle), nycho (claw, nail), and teuthis (squid)), sometimes called the Antarctic squid or giant crunch squid, is believed to be the largest squid species in terms of mass. It is the only known member of the genus Mesonychoteuthis. It is known from only a few specimens, and current estimates put its maximum size at 12–14 meters (39–46 feet) long, based on analysis of smaller and immature specimens, making it the largest known invertebrate.