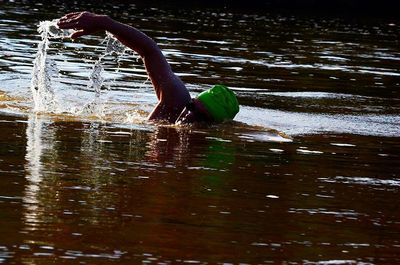 The Colorado River is one of the principal rivers of the Southwestern United States and northern Mexico (the other being the Rio Grande). The 1,450-mile (2,330 km) Colorado River drains an expansive, arid watershed that encompasses parts of seven U.S. and two Mexican states. Rising in the central Rocky Mountains in the U.S., the river flows generally southwest across the Colorado Plateau and through the Grand Canyon before reaching Lake Mead on the Arizona–Nevada border, where it turns south toward the international border. After entering Mexico, the Colorado approaches the large Colorado River Delta at the tip of the Gulf of California between Baja California and Sonora.

Known for its dramatic canyons and whitewater rapids, the Colorado is a vital source of water for agricultural and urban areas in the southwestern desert lands of North America. The river and its tributaries are controlled by an extensive system of dams, reservoirs, and aqueducts, which divert 90% of its water in the U.S. alone to furnish irrigation and municipal water supply for almost 40 million people both inside and outside the watershed. The Colorado's large flow and steep gradient are used for generating hydroelectric power, and its major dams regulate peaking power demands in much of the Intermountain West. Intensive water consumption has dried the lower 100 miles (160 km) of the river such that it has not consistently reached the sea since the 1960s.

In August 2015, Matthew Moseley made the first swimming descent of the Colorado River through Canyonlands for 47.5 miles (76.4 km) in 13 hours 56 minutes from Potash Point outside of Moab to the confluence of the Green River.