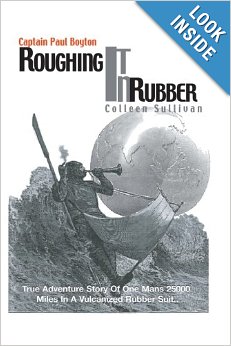 Roughing It In Rubber by Colleen Sullivan

Colleen Sullivan is the author of Roughing It In Rubber, a paperback book about Paul Boyton's traverse from Montana to Missouri. Described as "exciting, and full of humor as the Captain makes his way through the world's waterways. Deep sea diving, salvaging sunken ships and challenged by sharks. Going on to blowing up Chillian "Men O War."

Paul Boyton (often misspelled Paul Boynton) (29 June 1848 in Rathangan, County Kildare, Ireland — 19 April 1924), known as the Fearless Frogman, was a showman and adventurer some credit as having spurred worldwide interest in water sports as a hobby, particularly open water swimming. As an aquatic adventurists, he captivated the world, including crossing the English Channel in a novel rubber suit that functioned similarly to a kayak. As an entrepreneur, Boynton built Paul Boyton's Water Chutes park in Chicago, opening a New York saloon called "The Ship" on Broadway, and help found the Luna Park amusement park at Coney Island. Boyton is a member of the International Swimming Hall of Fame.