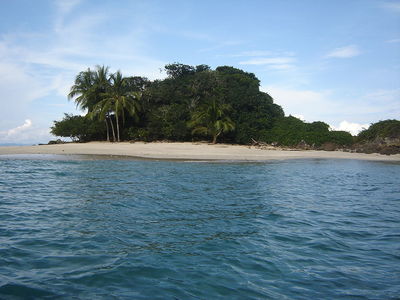 Coiba Island is the largest island in Central America, with an area of 503 square kilometers (194 square miles), located 15 miles (24 km) off the Pacific coast of the Panamanian province of Veraguas.

In 1919 a penal colony was built on the island and during the years that Panama was under the dictatorships of Omar Torrijos and Manuel Noriega, the prison on Coiba was a feared place with a reputation for brutal conditions, extreme tortures, executions and political murder. Nobody knows exactly how many people were killed in the prison during this period, but sources claim that the number could be close to three hundred. As such, the island was avoided by locals, and other than the prison, was completely undeveloped.

After the prison was closed down in 2004, its pristine condition made it ideal as a reserve. It is now said that the prison is haunted by the ghosts of prisoners. One story is that a guard was chasing a prisoner, but the prisoner was a ghost. The guard was so scared that he shot himself. It is also one of the last places in Central America where the Scarlet Macaw can be found in large numbers in the wild. The island is about 75% forested with a large fraction standing as ancient forest. Coiba Island is home to rare plant species found only on the island. The island also harbors tree species that have long disappeared from the mainland due to deforestation and overharvesting.