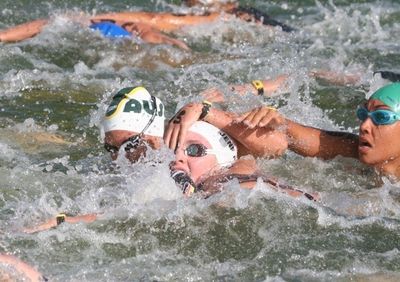 Photo by Javier Blazquez of Christine Jennings, surrounded by Olympian Angela Maurer on her left, Olympian Melissa Gorman on her right, and Olympian Poliana Okimoto behind her in the 5 km race at the 2008 World Open Water Swimming Championships in Sevilla, Spain in an example of open water swimming physicality 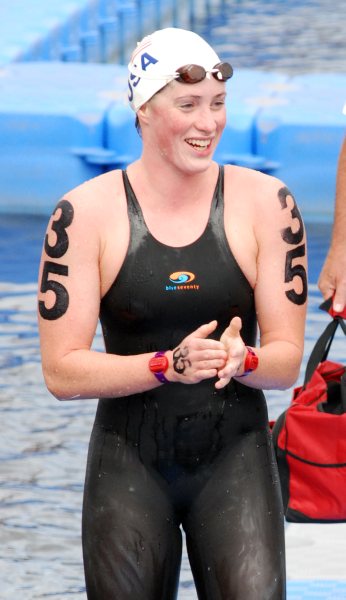 Christine Jennings at the 2011 World Championships 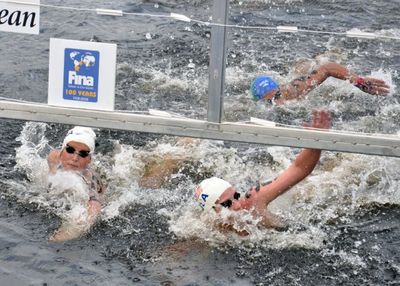 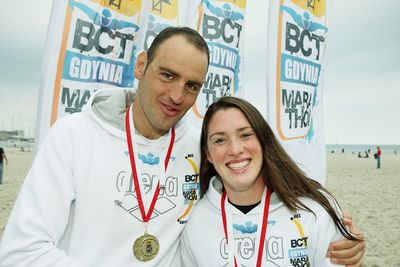 Christine Jennings is an American competitive swimmer, one of the fastest open water swimmers in the world. She was awarded the athlete scholarship by the prestigious International Academy of Sports Science and Technology (AISTS or Académie Internationale des Sciences et Techniques du Sport) for matriculation in January 2016.

She was the Gold medal winner in the 10 km marathon swim at the 2010 Pan Pacific Championships and finished 7th and 4th in the 10 km and 5 km, respectively, at the 2010 FINA World Championships in Roberval, Quebec, Canada. She has also won the prestigious winner-take-all RCP Tiburon Mile in San Francisco Bay and was a bronze medalist in the 10 km marathon swim at the 2011 Pan American Games in Mexico. She also won the 2012 Traversée Internationale du Lac Mégantic in Quebec, Canada, a FINA 10km Marathon Swimming World Cup race as well as the 2012, 2013 and 2015 BCT Gdynia Marathon competitions in Poland and the 2013 Faros Marathon in Croatia setting a course record. She also won the Great North Swim in Windermere, England on 13 June 2015.

She endured a freak injury as she was about to win the 2012 Rei e Rainha do Mar on Copacabana Beach in Brazil for the second year in a row. She broke a bone in her lower leg as she was running up the beach.