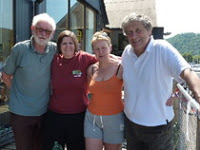 Christopher David Green ("Chris Green" born 21 February 1950) was inducted in the International Marathon Swimming Hall of Fame as an Honour Swimmer in the Class of 2010. Green has participated in open water marathon swimming as a competitor, served as an administrator, and was an innovator and pioneer.

Green has completed a number of swims around the world and a grand slam of British Long Distance swims. His career includes the following:

start from this location. For that contribution, Ben Huggard and Chris Green are pioneering the way for future swimmers.