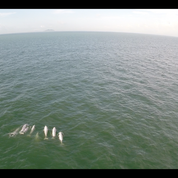 Simon Holliday swimming across the Pearl River Delta from Hong Kong to Macau together with Chinese white dolphins on 24 May 2014 during the 35 km Clean Cross Swim. Photo by Jeffrey Lim.

The Chinese white dolphin (Indo-Pacific humpback dolphin, Chinese: 中華白海豚) is a humpback dolphin species, one of 80 cetacean species. An adult is white or pink and may appear as an albino dolphin to some. Uniquely, the population along the Chinese coast has pink skin, and the pink color originates not from a pigment, but from blood vessels which were overdeveloped for thermoregulation. The body length is 2 to 3.5 m (6 ft 7 in to 11 ft 6 in) for adults 1 m (3 ft 3 in) for infants. An adult weighs 150 to 230 kg (330 to 510 lb). Chinese white dolphins live up to 40 years, as determined by the analysis of their teeth.

These dolphins inhabit the waters of Southeast Asia and breed from South Africa to Australia. There are two subspecies, with Sumatra, one of the Indonesian islands, as the dividing line between the Chinese and the Western subspecies, Sousa chinensis plumbea. The two subspecies differ in color and dorsal fin size. The subspecies found in Southeast Asia has pinkish white skin and a larger dorsal fin, but lacks the fatty hump of South African and Australian relations.

At birth, the dolphins are black. They change to grey, then pinkish with spots when young. Adults are white.