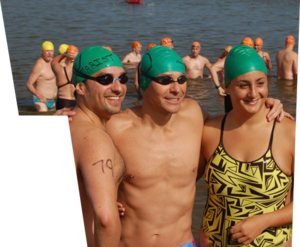 The annual Maryland Swim for Life is an open water swim competition and fundraising event to benefit Washington metropolitan HIV/AIDS non-profit organizations, as well as local watershed organizations advocating for cleaner waters. The Maryland Swim for Life, sanctioned by the U.S. Masters Swimming, begins and ends at Rolph's Wharf on the Chester River, one of the Chesapeake Bay's most beautiful tributaries.

The fundraising event, hosted by the District of Columbia Aquatics Club (DCAC), raised more than US$39,500 in its 21st annual event in July 2012. The 21st Annual Maryland Swim for Life, directed by Pablo Fernandez, was held in the Chester River (Chestertown, Maryland) and offered athletes the choice of swimming one, two, three, four, or five mile distances. Due to weather, the five mile distance was canceled and registrants swam in the 4 mile race.

The 22nd Annual Maryland Swim for Life is schedule for July 13, 2013. The event director will be Robert Jeter of the DC Aquatics Club, Inc. The 2013 event will again be held at Rolph's Wharf Marina in the Chester River (Chestertown, Maryland) and will offer athletes the choice of swimming one, two, three, four, or five mile distances. New for 2013, Swim for Life will offer a 2.4-mile Triathlon Challenge Swim!

The Maryland Swim for Life held its first competition in 1991 and was organized by Joe Stewart, a longtime advocate for HIV/AIDs organizations who was inspired to start the swim competition after participating in Provincetown’s Swim for Life.